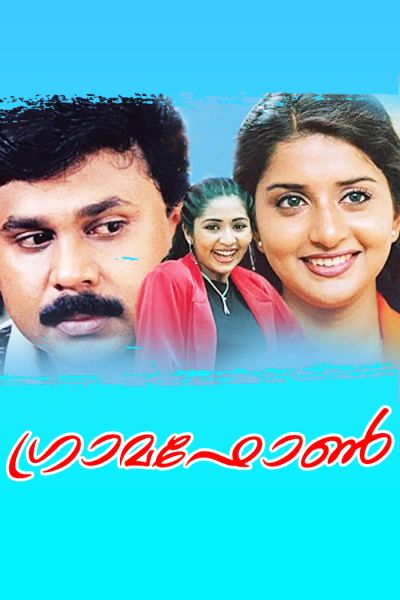 Gramaphone is a 2003 Malayalam musical drama film by Kamal starring Dileep, Meera Jasmine and Navya Nair.  Sachidanandan (Dileep) runs an antique shop in the Jewish street at Kochi. He is famous for old Gramophone records. Jennifer (Meera Jasmine), Pattu Set (Oduvil Unnikrishnan), ‘Saigal’ Yousuf and Tabla Bhaskaran (Salim Kumar) are Sachi's fathers close friends. Sachi's father was Raveendranathan (Murali) who was a great music director who died leaving him with a lot of musical instruments and some gramophone records. Sachi hates music, as he believes that his father has not made any money out of it. Aryadevi, a famous singer, who has been given her first break by Raveendran, comes to Kochi from Bombay with her daughter Pooja (Navya Nair). Pooja and Jennifer become friends and she introduces the mother and daughter to Sachi. Jennifer has a soft corner for Sachi who is unable to express his love for her. Meanwhile, Pooja slowly starts falling in love with Sachi. Then the news come that a young Israeli soldier is coming down from Jerusalem to marry Jennifer. Jennifer's grandfather Gregory (Janardhanan) is delighted that now at least he and his family can go back to motherland. Jennifer agrees to the marriage as she wants to see her parents happy. But things take a change from then.