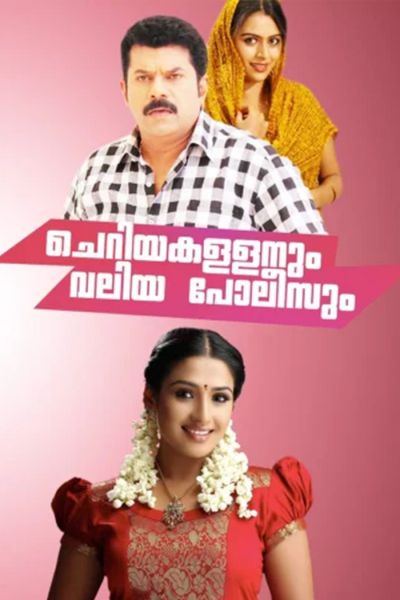 Cheriya Kallanum Veliya Policeum tells the story of a mysterious man Sadasivan (Mukesh) who walks into a house at a village called Pancharakkara, knowing that the man of the house Kumaran (Jagadeesh) has committed suicide. Soon he becomes dear to everyone around, and is a big help to Kumaran's widow Soumini (Vidya) who has been left high and dry after her husband's demise. The whole movie has been set around a house, where a death has taken place. Everyone who could probably add to the village scenario is around; starting from the Panchayat President who sneaks around with ulterior motives in mind at midnight, to the comrade, the local tea shop owner, the tailor and the drunkard to name a few.Amidst these several caricatures, most of which serve no definite purpose, one surprisingly stands out. Kuttappan (Kochu Preman), the blind man who hops into a car to show the guests their way is an eye-opener. He is there on almost every scene and there are quite a few occasions when this diminutive man throws in some big surprises at us. The movie was a surprise hit at the box office due to its low cost and satellite revenues.