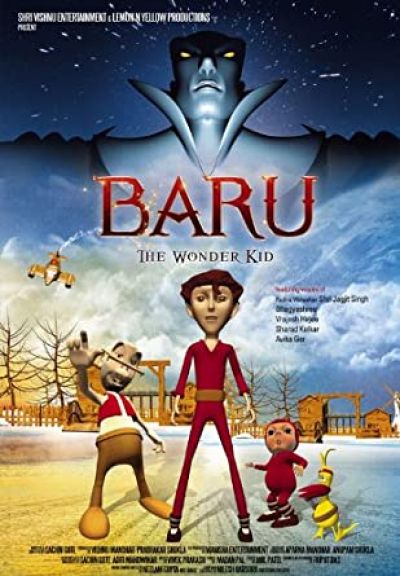 It is the story of a twelve year old orphan boy BARU and his courageous journey to free his sister ANANNYA (fondly called as ANI), from the clutches of the Devil Prince - ZUKAYU. BARU'S parents were very sincere and honest people. Once, they prayed to god to give them such a power by which they would be able to serve or help the people better. Their wish was granted! And to their happiness, they were blessed with a daughter, who would get the power called KABOOM on the day she turns three! Unfortunately, the news about KABOOM reached the Devil's Kingdom very soon. And as soon as the Devil Prince ZUKAYU heard this, he started making malicious schemes to snatch the great power of KABOOM, before it was bestowed upon ANI. Soon after ANI was born, BARU'S parents were going to the other village through a jungle when something mysterious happened. They vanished without a trace, never to be seen again! From then on BARU looked after his kid sister, and showered all his love and affection on this angel. BARU did not know that ANI was actually a gifted child. He was oblivious of the dangers lurking around ANI. Both BARU and ANI were living happily with their friends, when suddenly one day ANI is kidnapped by ZUKAYU. Now the story turns thrilling with BARU'S search for ANI. He has no idea about ZUKAYU'S whereabouts; still he is determined to bring ANI back. During this fantastic and adventurous journey, he realizes what his strengths are and overcomes his weakness. On his way, he wins the hearts of many people and learns war techniques. Inspite of all the difficulties, BARU's love for his little sister remains constant. It is this love that becomes his biggest strength.